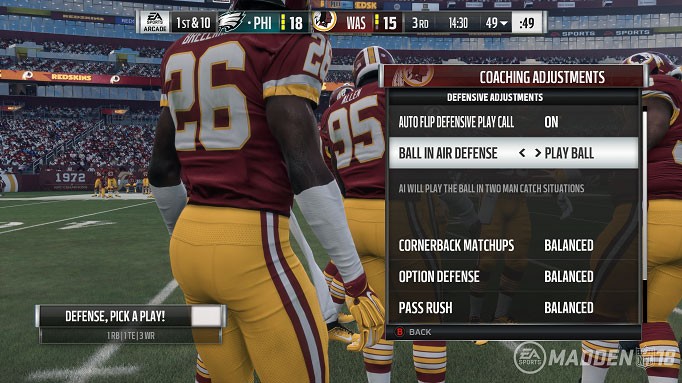 All blockquotes from EA Blog linked above.

Pretty obvious here. Basically, auto flip makes sure that the strong side of your defensive formation (where you have more people) will match the strong side of your opponents formation (where they have more people).  I REALLY don’t like auto flip and I have never heard of a serious player using it. I will do a post explaining strong sides and weak sides of formations. For now, probably just turn this off if you have some level of football knowledge.

This causes your defender to play under the route and go for the INT. Think of this as the way Asante Samuel or Ronald Darby plays. If you don’t need an interception, I wouldn’t use this because it is high risk and you will still get picks without it. Considering how poorly players play in MUT, I would avoid this unless you are just screwing around and trying to get someone to quit.

Pretty obvious here. This is the safe, low risk/low reward option. As worded, it seems like it would lean towards a “let them catch it and then tackle them” type thing. I don’t use it much because I think it is swat ball lite and I would rather use swat ball.

My personal favorite. Your defenders will try to swat the ball to disrupt catches. Using swat ball effectively is a MAJOR KEY.

Just read these and decide accordingly.

I pretty frequently use “aggressive.” If your opponent isn’t using a hard count, there is no con. I suppose the increased fatigue matters but that is worthwhile if you are getting sacks and pressures. The jump snap bouns gets you faster pass rush power move/finesse move animations and is all around good.

On offense, be sure to use a hard count to mess with your opponent and potentially get them out of aggressive pass rush.

I always have this on in solos. In head to head games, it is up to you. Pretty simple, play for a fumble or a tackle: you get to pick.

Same deal as above. Note the con on conservative tackling. That’s pretty interesting.

Remembering to turn this on “conservative” can probably help you to win games when you are chewing clock.

I am 80% sure this option doesn’t exist in MUT. I will check tonight. If you can check for me, hit me up on twitter. @AdRobsGC If it does exist in MUT, I would put it on aggressive until you get penalties.

I think I am leaning “aggressive” here because the con doesn’t have the word “interception” isn’t in it. On this one, you can just leave it on “balanced” and adjust with your user.

This one is a little tougher because you don’t always have time to get your thumbs into a user catch situation on shorter passes. Your call. Weight the pros and cons. I am a huge fan of the possession catch because you can control the clock and have a surer chance of a catch.

Cornerback Matchups is a Coaching Adjustment that allows the player to set what criteria they want to use to determine which wide receivers their CBs matchup against.  Cornerback Matchups work for both man and zone defenses. To maximize the effectiveness of this feature, users ideally want to make sure the number of CBs on the field is equal to or greater than the number of WRs.

If, for example, the offense has more receivers on the field than cornerbacks, the CBs will still follow the matchup criteria set by the user. But only the CBs who are projected to matchup against a WR will swap positions with one another.

This one is fascinating and it is honestly the reason I wrote this article. Let me note where each option could be most helpful.

The options the user has available are:

The most basic: best CB on best WR.

Helpful on deep routes. Not necessarily helpful on intermediate routes.

MAN DEFENSE GODSEND. This stops your man defense from getting torched by guys like Jordy Nelson (High RTE) from just torching your CB because he has high RTE. If you are running 2-man under, turn this on. If you are running zero-man, however, doing so will leave you open to deep heaves.

This is basically a user-controlled version of match up by OVR.

By Depth Chart gives the user the ability to set specific cornerbacks to a specific receiver.  For example, if a user wants their highest-rated cornerback to matchup vs. the second highest overall-rated receiver, they can simply go to the team depth chart and place their highest rated cornerback into the CB2 slot.

Hopefully, this article was helpful to you. feel free to hit me up with thoughts or questions. @AdRobsGC