Do You Save Coin By Keeping It? (Offense) 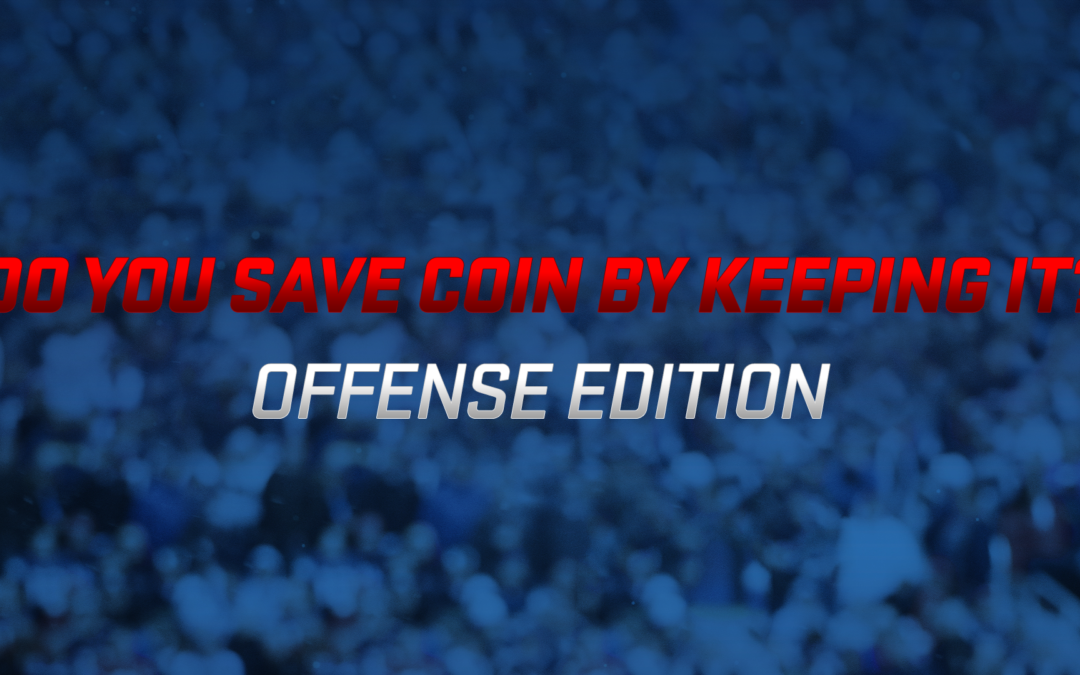 This is a 2 Part Series. Today we will look at offense and tomorrow, we will look at defense and special teams. Generally, people believe that holding off on buying MUT players until seismic market shifts occur is good wisdom. I would even venture to guess that most people believe they could get the same team cheaper in October than at Launch. In this series, we will test that theory.

As we prepare for the launch of Madden, we are cancelling social engagements, putting in requests for PTO, and maybe even faking our own deaths in order to adequately create space in our schedules for the launch of Madden. If you are in high school in one of those parts of the country that starts school on September 14 or some crap like that (I am looking at you, New Jersey), I envy you. I get three weeks off a year and you high school kids get fifteen. What kind of nonsense is that? But I digress. Today, we are talking about Madden. Specifically MUT. There are two types of people that will begin to play madden next week. There are those who will buy bundles and quick sell everything that isn’t red and there are those who will grind away at solos and look at their coin stack with a sense of pride and dignity. If you are apart of the latter group, you probably want to invest those coins in the best way possible. In an effort to help you, we are going to look at MUT market shifts from 2017 and try to answer this simple question: Do I save coin by not buying players from the auction house until after the first major promo?

The set up was simple enough. Create a team of the best cards at launch in 2017 and then track their prices from Aug 23, 2017 (Launch Day) through Oct 23,2017 (2 Months Later). Interestingly, Oct 23 is two days after Most Feared promo release, a time generally thought of as a “Market Crash” point . Go ahead and search “Most Feared, Market Crash” on Twitter. You will find many people telling you to hold onto your coin and go into your MUT bunker. Here was the list of players I came up with:

After I had this list, I searched each player and took note of their launch price and their price on October 23. Obviously, this does not account for random bumps either way on August or October 23 but the results were fascinating. I honestly expected the losses on these cards to be massive, but a player who had all of these cards at launch and sold all of them on Oct 23 would have actually MADE coin.

The negatives represent losses. So Aaron Rodegers went from 101,000 coins to 65,000 coins. Le’Veon Bell was another loss, going from 76,000 coins to 36,250 coins. At this point of the experiment, I thought I was about to make the strongest case for holding onto coin EVER. And then things got weird. Antonio Brown went from 280,000 coins to 343,000 coins. In fact, ever receiver increased in value, Odell Beckham being the least substantial and only gaining about 7,000 coins in value. Gronk went down by about 25,000 coins and Yanda, Frederick, and Incognito each lost about 3–5k a piece. And then there is Tyron Smith, who increased in value by almost 35k coins, representing the largest percentage change in either direction. Mitchell Schwartz gained about 8k coins but it was a large change considering his starting price.

In the end, having all of these cards at launch would have netted a user a 1.83% increase in their investment. If they could avoid the big losses of Aaron Rodgers and Le’Veon Bell, they get an 11% increase. However, Tyron Smith is such an outlier that missing on just him lands you with a 5% decrease on total investment. So, in the end of the day, you should go after the guys you want to go after, but watch for those sesmic market shifts and get out before you lose too much value. We will do this again with defense and special teams on Monday. See you then.

In the furture, I would like to look at how TOTW and FO affect these numbers. So is the reason for the increase the non-skill position players simply a result of more coin being in the game and the skill position marketplace getting diluted by promos while the offensive line beast remained few and far between? More research would be required to detirmine that.