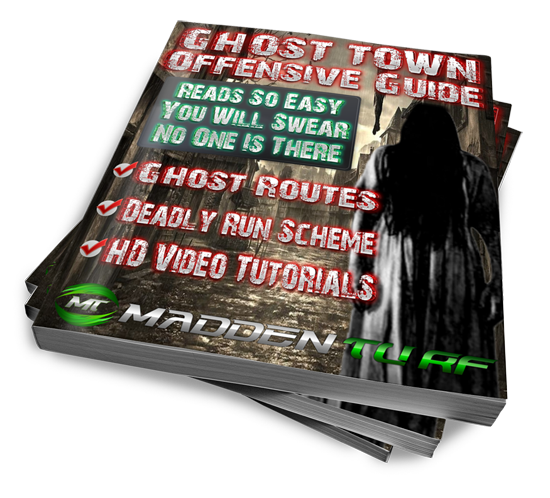 The most recent patch for Madden NFL 17 attempted to put a stop to the speed boost that a motioned WR would get when you would let him almost set, and it did that by adding in a huge delay. Unfortunately for EA Sports, and fortunately for us players, they actually created a monster of a problem with motion that lets us get old school “Ghost Routes”. This guide will be based on the Los Angeles Rams offensive playbook, however it is worth noting that you can run the main concepts in this guide from several other playbooks. We will go over a main scheme from three formations that you can audible to from one another as well as a scheme that Shugz designed to play against people running 3-4 based blitzes, and a few extra bonus run concepts to keep your offense balanced. This offense very much has a west coast feel to it, designed to keep your completion percentage high and the ball moving downfield. Couple that with a few setups that will push the ball downfield and a few outstanding running plays and your offense will be moving like never before! Let’s get into the Ghost Town Offensive Guide!

The patch affected motion in a really unique way, leaving us with three types of motion that we can use. It is important that you understand the variations in motion COMPLETELY in order to be effective with this offense. Below is a list of available motion snap timings that will allow you to utilize the offense in this guide.

Totally Set– This motion is when you motion a player on any route and let them get completely set and then some. General rule for this is to give an extra half second to a full second after you think he is set. The WR will then run the route he is supposed to.

Still Moving– This motion is when you motion a WR and snap them while they are still clearly in motion. The WR will run the route they were on while in motion with a slight delay to get upfield.

Ghost Motion– This is the monster that EA created with the patch and then made stronger with the follow up patch. This motion is meant to be snapped at that “almost set” point where we used to snap for the speed boost. When using this motion the WR will run their route with a delay that allows the zones to fall back off of them. Previously they would revert to their original route so we had to use certain plays, but the nice gentlemen at EA Sports decided to patch that so now we can use it from any play by hot routing the WR.

The Main Formation
This section of the guide goes over the Gun Bunch Wk portion of the scheme. This formation is the main passing formation in the scheme and it is important to learn all variations of a play to achieve success. If you only run one version of a play it will be easy for your opponent to lock up using cross man principles like most good players do now with Gun Bunch. If you have all variations working for you in unison however, this is extremely difficult to defend and very easy to make reads that will keep the ball moving.
INSIDE CROSS: Inside Cross will be the staple play of our scheme. This play will give us several solid variations to run against our opponent. Along with our ghost motion and general motion with this play we will also have a RB motion that glitches out Cover 2 and will allow us to throw the backside c-route against man coverage at will.
VERTICALS: Verticals will be ran much the same as any other Bunch verticals play has been in history. The only real difference here will be the delay from the ghost motion and what that adds to the scheme. Along with that we will look to exploit crossing routes from our Wide Receivers and drags from our TE.
PA POST: This play is another outstanding staple of the offense. Again we have several variations to keep our opponents guessing with who they are cross-manning. While Inside Cross allows us to attack short to intermediate, this play has a post that will allow us to attack over the deep middle.
QUICK SNAP SETUPS: These setups consist of two hot routes and no motion in the event that you want to snap the ball as soon as possible. The motion adds a certain element of “glitchiness” to the offense but it is still important to keep your opponent off balance from time to time with a quick snap after they have become used to having a certain amount of time to set their defense.
MIX INS/SITUATIONALS: Once in a while you will come across someone that is running something outside the norm or a particular style defense that you want to take advantage of. Below is a list of plays that are not a part of the main scheme, however add value to the scheme against certain opponents or in certain situations.

The Secondary Formation
Gun Tight Offset TE is a popular formation year in and year out on Madden because of the ease in which you can flood the field with a sail concept, or send multiple crossing routes across the field to put users in a situation of having to choose what to leave open. We didn’t bother looking too deep into the formation prior to this patch because it would be more of the same, streak, corner, flat….drag this guy, drag that guy. With the addition of the ghost routes however, this formation has a new and interesting quirk that makes it worthwhile.
SETUPS USING MOTION: Just as with Gun Bunch, the staples of the offensive formation in this scheme use various versions of motion. Below are the main three passing plays that we will use and their adjustments.
OTHER PLAYS: Since it would be easy for our opponent to key in on those plays without similar motions working off of them, here is a few setups to mix in to keep your opponent off balance.
RUNS AND SCREENS: One of the huge benefits of this formation is that the run audible is an outstanding inside zone, plus it comes equipped with other runs for a change of pace. Also there is a great screen play that we can use to catch our opponents off guard.

Good Audible Formation
Gun Trey Open Offset isn’t a formation that you will be coming to the line of scrimmage in very often, however it does offer us three great plays in the audibles to change into if we are running hurry up or don’t like what we see in our original play. Beyond that there is a great screen play to the RB that you can use once or twice per game, and a couple different plays with the same motion as well.
THE AUDIBLES: Below is a breakdown of the plays located in the formation audibles for Trey Open Offset. These plays can be great to change into during a drive while running hurry up or if you don’t like the look of what the defense is doing against your original play.
MIX INS/SITUATIONALS: Here are a few plays from Trey Open Offset that you may want to mix in throughout the game as a change of pace. We would not call these plays an important part of the offense, but having more never hurt.

Weak Tight Twins is a great balanced formation to use against people that are sitting in the popular 3-4 defenses that are very heavy to the right, as well as someone running general defense not designed specifically to stop the run game. Along with that you can utilize Strong Twins Over which offers a very powerful running play and simple pass concepts that work well along with it.