Let’s Talk About Power up Sets 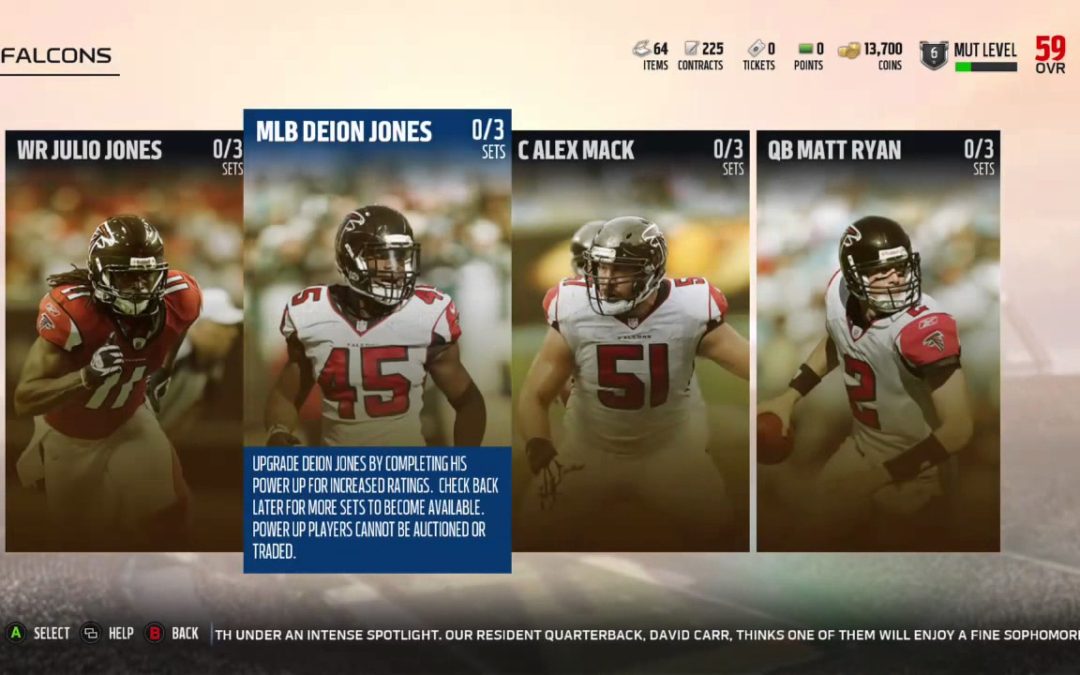 Today’s article is going to dive into how much these power ups actually cost, and are they worth it?

For this conversation we are going to be using a little averaging and sniping to try and get these power up sets as cheap as possible. In this example we are going to use the one power up set that I might do (Todd Gurley). You can kind of see where I stand on these already but let’s give the set the benefit of the doubt and start doing some math.

With regards to today’s article let’s set a few guidelines.

Let’s do a power up set.

Tier 2: For this step you need to add one more silver token and then one Gold Token. Gold tokens require 10 gold players of the specific team you need. 5 70-74 and 5 75-79 overall players. If you reference the last article on flipping gold cards you will see that each team averages around a different price. For me personally I try and get each 70-74 overall card for less than 1,000 coins and for 75-79 overall cards the goal is 1,500 coins. Some teams this is easy to do, some teams it takes quite a bit of sniping (Redskins, Falcons, Cowboys, Chiefs to name a few). So the gold badge is going to cost on average 12,500. Adding in the silver token that is required we are totaling 17,300 for this tier bringing our grand total to 26,900 coins.

Tier 3: This is where we are going to start seeing the coins go down the drain. For tier 3 you have to add another gold and silver plus the core version of the set you are working on. For our example today that is going to be 83 overall Todd Gurley. So just with our tokens we are already totaling up to 43,200 coins. As of today Todd’s 83 card is averaging around 13,000 coins. Let’s say I get him for a good price and only spent 11,000 bringing our total so far 54,200 coins for a non-actionable 84 overall card…. Geez.

Tier 3 (NAT): Quick side note on the NAT version of this set. Along with everything else you have to add to this set, you also have to add 2 Elite tokens. With our total for tokens already at 43,200. If buying all 8 elite players you need for an elite token at a discounted price the total is still going to be around 55,000 coins per token and with needing two tokens that immediately brings your cost of upgrading an already NAT card by 1 Overall to roughly 153,200 coins. Please do not do this set. We are going to continue hoping no one does this set.

Tier 4: For this tier you no longer have to add any tokens (Thankfully), all you have to add is the newest version available for power up. For Todd his next version is the 86 overall Team leader set.  I am planning on writing an article digging into and focusing on Team leaders but, the short version is you need 3 gold tokens and 3 silver tokens to earn all the leaders to earn the 86 overall version. After all 6 tokens you end up spending 51,900 coins. For this set though you do have to play solos and you will earn a guaranteed 27,000 coins with potential for a little more from the quicksell pack. So after the Solo earnings you will have spent roughly 24,900 bringing our grand total to 79,100 coins for an 87 overall card. Is this terrible? No, but you are also investing these coins into a card that you cannot get any coins back out of by selling.

Tier 5: Todd is one of the few players so far this year to have a tier 5 version of the power up. This tier is similar to the last tier in that you don’t have to add any tokens directly to the set, you only have to add the newest version of the card. Todd’s most recent version is a 91 overall ToTW Master card. This is where I most likely would have to draw the line. The 91 overall version costs on average roughly 390,000 coins. For a set to require you put a card worth that much into it with no chance of selling that card back for any profit is just ridiculous in my opinion. If you were to snipe some of the cards like I would try to do to make the set as cheap as possible and let’s say we got some good deals and only spend 350,000 coins. Adding this card to the set brings our grand total to 429,100 coins for an NAT 92 overall card.

If you have an outrageous amount of coins and have no issues throwing coins away with no chance of using them later than go for it. With a few of the power up players still only having a tier 3 option some of the numbers you need to remember is that not counting the core player that you will need for the tier 3 set, just in tokens you are spending roughly 43,000 coins. If you already had the core version you are losing the value of that card and then paying an additional 43K for one overall. Again if it is worth it to you than go for it. You do also get an ability, but for anyone that is on a budget and or playing #NoMoneySpent than I would highly advise against doing these higher tier Power up sets. The thing when playing MUT on a budget, it isn’t always about making coins sometimes it is also just keeping and not losing coins. Thanks for reading.