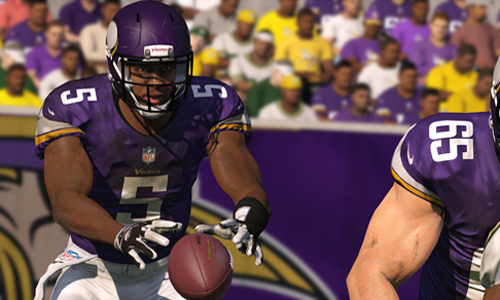 In this Madden 15 tip video, RouteCombo breaks down one of his favorite plays from Gun Empty Bunch in the Minnesota Viking’s playbook. The name of the play is called Vikes Trail. This play creates a great smash concept to the left of the screen and a levels flood coming from the right.

Our reads on this play will be in groups. We will start by reading the left side of the screen in a high-low fashion on the smash concept. Then we progress to the right of the screen and read low to high on the levels flood. This makes the reads very easy when you can read multiple WR’s on the play in the same field of vision.

Our first read on the play is the smash concept on the left side. If the hitch is open (typical against most zone coverage and almost always against backed off man coverage) then throw it with a down lead bullet pass. If the hitch is covered by man press or the zones sit down on it, look to go over top to the corner route. The timing on the corner route is crucial to making it a completed pass so make sure to get the timing down in practice mode. If you don’t like either of these options move on to the right side of the field.

The second read on this play will be the three route combination on the right side of the play. These routes are drag, trail, and post. All three of these routes should be visible at the same time when you look over the middle of the field. The drag will be open against most coverage for at least a minimal gain. The trail route gets open at two points against zone coverage. The first spot it may be open is when it breaks back inside, the second is deeper down field as it gets in between zones. The post is open against most zones, the only exception being a cover 2 sink or tampa 2 style defense where the middle linebacker drops deeper. It is also open against man as it makes the break to the inside. Throw the post with an inside lead bullet pass.

Check out the video to see the play in action!

If you want to get more great tips make sure to check out our FREE 7 day trial of MaddenTipsTV!