Madden 17 Chemistry | So Many Choices! 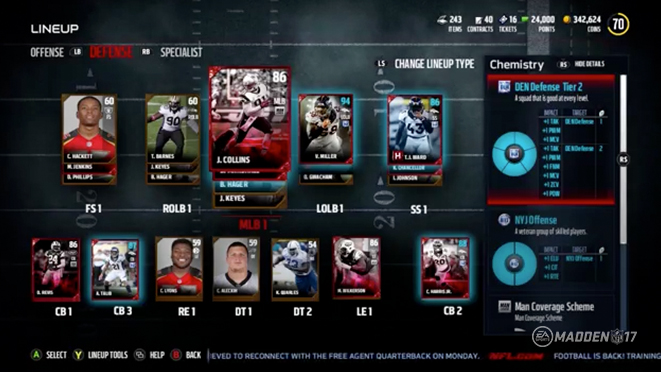 Today we are going to focus on probably one of the best new features in Madden 17…chemistry! Now chemistry itself isn’t a new thing we have been dealing with it in MUT forever but for the first time ever you can actually see its effects right in front of you!

In Madden 17 you can pair players together to increase their stats and in many cases their overall ratings. The last few years I would spend time trying to get my chemistries above a 90 because it was thought there would be some positive effects unfortunately most of the time you couldn’t tell the difference in having a team loaded with chemistry and one without.  The one chemistry that you could see a visible effect with would be those that would improve your route running and even then there was no way to really quantify it.

Chemistry has completely changed in Madden 17 and on Sunday September 4th it went to the next level. Solos have been instituted in Madden Ultimate Team that will change the way your players perform on the field. The biggest game changer is the Conductor chemistry, which will allow you to call multiple hot routes at a time. For those who have been around since Madden 25 we remember the glory days of being able to hot route all of our receivers before ever reaching the line of scrimmage. Since Madden 15 we have been restricted to only one hot route at a time.  Personally in a game where so many different zones have been implemented to stop the offenses having a chemistry designed to assist in throwing dots is welcomed.

The Battle Ready chemistry is another that I can see having a big effect on game play on a game in and game out basis. Us senior citizens of the Madden Community here at the Turf Team joke all the time that we can not keep up with these younger kids and their fast fingers and when tackle battles were implemented it was something I did not see myself succeeding at. Not only did I have to figure out what button would be the battle button but I also had to press it faster than a 16 year old…yea that wasn’t happening. Now knowing that every tackle batter with these players will be the A button levels the playing field a little bit for us.

There are several other chemistry additions for your players that you will be able to work towards daily on Madden Ultimate Team such as Zone Blocker, Chain Mover, Line Pusher and many others.

The most exciting part of all of these chemistry additions is that it is just the tip of the iceberg. There is no telling the direction that Madden Ultimate Team will go with chemistry but there have definitely been signs that there is a movement towards growing players that you already have and building off of them.  The dynamic rookies were the beginning of this and we saw it pay dividends with Derrick Henry being upgraded to an 84 overall today.

Who knows what the future of chemistry will look like in Madden Ultimate Team but the evolution of MUT this year has been very exciting. Simply seeing the amount of effort being put into growing the mode and the adjustments that have already been made to rewards based off community feedback all point in the right direction.

Feel free to comment below with some of your favorite chemistries and other topics you would like us to cover for you here at Madden Turf.

Check Out Our Membership Options!