Review of Maddenmascot | Honest and Unpaid 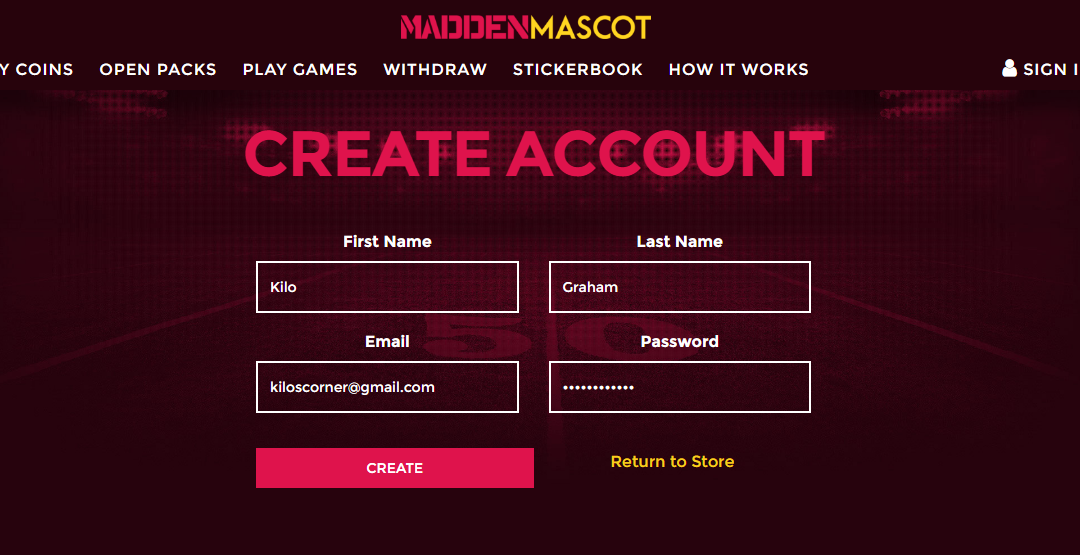 Yesterday the Madden community received news of a new website. We were told by several YouTubers all uploading promotional videos to encourage us to go check it out, go open some packs,  and even SPIN THAT WHEEL! What each and every YouTuber forgot to mention in their promotional video is that the website was in fact online gambling and should not be visited by children, or even really anyone with an addictive personality. Some even forgot to mention that it was a paid review of the website. However, this review is not about the YouTubers that promoted the website, it is about the website itself, so let’s get into it.

Let me start this review by saying that the opinions in this article are my own, and in no way reflect the opinions of MaddenTurf as a collective group…..although they should.

Before we begin to go over my experience with the company, let’s take a quick look at the company in general. The website is registered in London, click here for the incorporation papers. That itself isn’t very strange as plenty of companies that operate on the internet targeting United States customers are not actually located within the United States. The strange part comes with the social media account for @themaddenmascot. On the official twitter account the company is located in Michigan. Two conflicting locations raises a bit of a red flag to me, not exactly damning evidence of a problem however, so the review must go on.

Upon registering an account on MaddenMascot.com, I was not asked my birthday, or asked to agree to any terms of service that say that I am of any certain age. Registration was actually a breeze, I didn’t even have to confirm my email account. Here is a video of their terms and conditions, and FAQs in case any happen to change following this review. Ironically the “Legal Section” that they reference in the Terms and Conditions doesn’t seem to exist on the website. There is no audio on this video, so only bother watching it if you really don’t think I am telling the truth….

So once I was registered I was immediately brought to a screen asking me to buy MaddenMascot coins. Of course I did this because I couldn’t gamble without them. I purchased 100,000 coins at $20 usd, which is more than double the rate I would have paid using a third party seller over social media for actual MUT coins…..if I engaged in that kind of activity of course.

The next step was to see what kind of things we could gamble on, so my first stop was the packs because packs are the main product that they push. Unfortunately 100k wasn’t enough coins to get into the “big boy” packs, which if there is any impropriety on the website’s behalf that is almost certainly where it would be. So stuck at the beginner table I proceeded to open “Elite packs” for 50k each, surprisingly (or not so surprisingly depending on how you look at it) I was a winner, over and over again. I didn’t win anything big, but I was consistently winning a couple thousand coins each time on Elite packs. In fact I believe I only lost coins on an Elite pack once. TOTW packs were a different story however, I opened three of them and lost one. Even though I was winning, two things did bother me;

Another thing to note was also that there didn’t seem to be any consistent reason why the value was off, it almost seemed like the website just picked a number slightly over or under 50k at random. But anyway, I was winning so who cares right? Here is the video for the pack opening;

As stated in the video, it was odd that I was just winning over and over again, but considering how many cards can be pulled and the strange values assigned to the cards, I couldn’t get an idea of what the odds of winning truly were. So to get an idea of that I went exploring the mini-games because the odds on those were much easier to figure out.

Highest Player is one of the games on MaddenMascot. The concept is simple, you get a “random” card and so does the “Mascot”. Whoever gets the higher overall card wins. I played this game three or four times and each time it was a draw with both of us receiving the exact same overall rated player. To be honest, in a game where your odds should effectively be 50/50, this spooked me and I did not continue playing.

Now this is where things get interesting. The game is called “Spin the Wheel”. To be honest the game reminded me of a game in my local casino called “The Fruit Wheel” where you place bets on what fruit you think the wheel is going to land on. Unlike the fruit wheel however, which increases the house odds through decreasing the payout for the more frequently appearing fruit, the MaddenMascot version kept it very simple by only having a total of six spots on their board. On this board were the following;

So based on there being six total spots, all we have to do is to divide the number of spots for a given result by six to know what percentage we can expect to land on each spot. Now it won’t be exactly that percentage because obviously chance does play a part in it and some people are just unlucky, but it should be in the ballpark of the percentage if in fact the wheel is truly random. Here is what happened on my 68 spins of that wheel;

So after watching that video we see that there is more than reasonable suspicion to believe that the website does in fact alter the probability of winning behind the scenes in a fashion that is not made known to their customers. This is not only extremely shady in terms of business practice, but also highly illegal if it is in fact occurring. Here is a link detailing a similar situation in the same area that MaddenMascot is registered in;

It cost me $20 to put together this honest and UNPAID review of Maddenmascot.com, but I hope that $20 saved someone from going down the rabbit hole, or someone’s parents the frustration of dealing with their credit cards being maxed out by children that just don’t know any better. It my strong recommendation after this review that you should NOT use Maddenmascot.com in any way.

Also as a side note to the YouTubers promoting this site, this site is not selling coins, it is a gambling site. Those are two totally different animals. So whatever your feelings about selling coins are, at least that is an exchange of money for product, straight up, with no deviation. This service is not the same. This service can lead to addictions that can have long lasting effects on people’s lives, and in many cases children’s lives. Think before you promote something because like it or not, you are viewed as a role model by many kids out there.