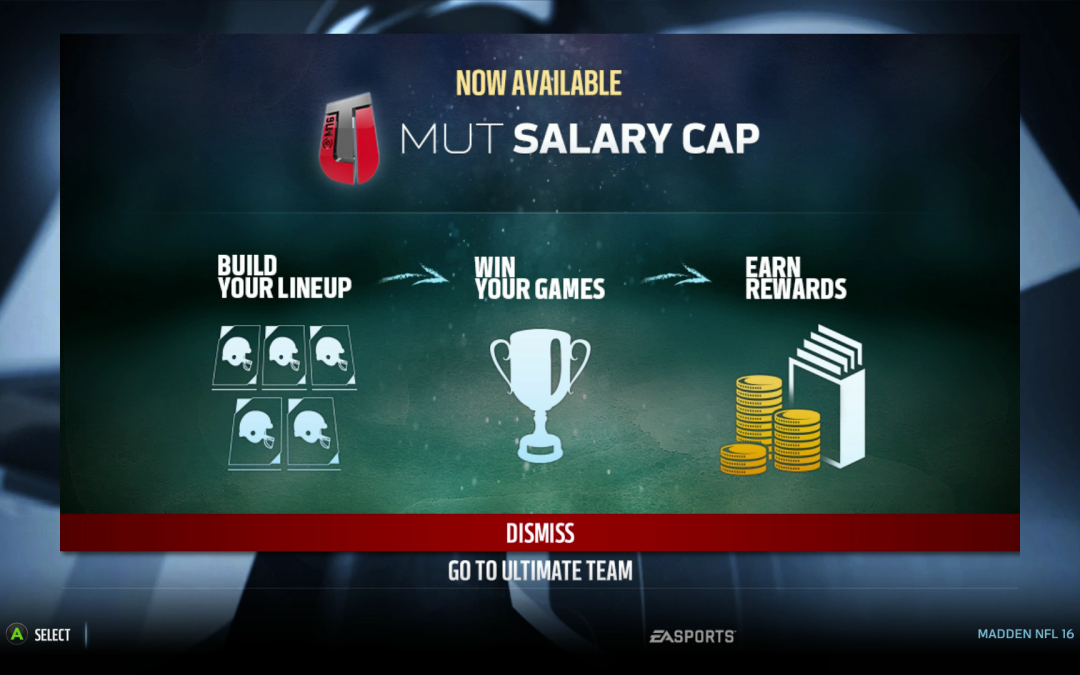 In our previous article we covered Draft Champions for Madden 17. Today we are going to cover the pros and cons of Salary Cap the method of qualification that I will most likely be using this year. As you may remember the final tournament of last year was based around Salary Cap and while not perfect it was definitely a major improvement from the Draft Champions qualification process.

Salary Cap was my favorite mode last year outside of MUT. It provided the ability to maintain some sort of control while playing in the competitive scene.

In Salary Cap you are able to construct your team with the players you want as long as you stay below the cap. Each player in Madden 17 has a cap value assigned to them and at the moment you must stay below a cap value of 750 while constructing your team. What makes Cap better this time around is that at this point there are no Golden Tickets or highly over powered players. So while last year life was tough if you didn’t have Golden Ticket Gronk, Clowney, Evans or Dez this year you build a solid Salary Cap team without breaking the bank.
Let’s get into some of the pros and cons of Salary Cap…

I would recommend the following tips while playing Salary Cap:
• Build your team around your scheme and know where you can save- If you know you run Nickel 2-4-5 every down there is no need to have a ton of cap space spent on 7 defensive backs.
• Make sure you are strong in key positions- For example on Offense do not cut corners on Quarterback unless you want to on occasion hit the hot dog vendor while attempting a corner route.
• As with Draft Champions go into Salary Cap with the mindset that you will lose games no matter how good you are. Learn from it and don’t let it get you down.

When I weigh out the pros and cons of Salary Cap vs Draft Champions I am going to choose Cap 9 out of 10 times. My only hesitation with Cap is the first tournament being on Draft Champions but to be honest with the grind that it is going to take to qualify there’s a good chance that I will lose my sanity if I try to play as much Draft Champions as I did last year.

As always if you need advice or help with Salary Cap feel free to reach out to us on twitter. The race for a 1,000,000$ has already begun.