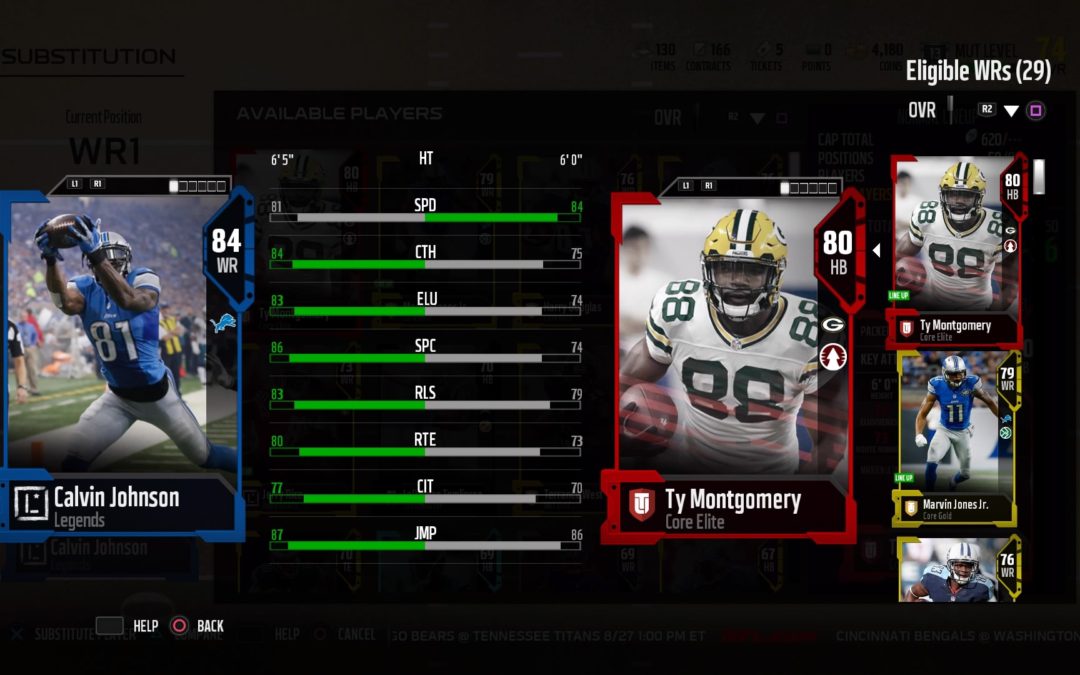 Attributes are an essential part of building a team. If you have been around Madden for any length of time, you have heard developers discuss such things as “attribute thresholds.” In this article, I will provide the Madden teams most recent stab (from Madden 15) at explaining attributes through a link and explain, in the same order, what I have heard about each attribute and why I think it matters. The explanations on this page are rewordings so I would recommend you open the linked article in a tab. The comment section is helpful because this is something of an ever evolving beast. If you do not think any part of this article is accurate, please let me know. Original Article: Here You will need to read that article in order to get the exact definitions of the attributes. I recommend it because it is helpful.

Speed (SPD) – The top speed that a player can achieve. Acceleration is how fast they get to that speed.

Strength (STR) – Pretty all inclusive. Apparently, it affects everything from a push on the line to power moves.

Agility (AGI) – The ability to change direction. useful for things like cutbacks in zone running schemes

Acceleration (ACC) – The time it takes from standing still to top speed.

Awareness (AWR) – being aware of what is happening on the field.

Stamina (STA) – how fast your player turns red in the pre play menu.

Trucking (TRK) – how effective is the players

Ball Carrier Vision (BCV) – The runner’s ability to find the hole and the downfield lane. Not sure how much this matters with user control, but some runs actually work well if you let the computer take the first few steps.

Carrying (CAR) – The runner’s ability to not be Tavon Austin.

Catch in Traffic (CIT) – not open field catching. Rex has mentioned a “nearby player penalty” in a twitch chat once. not sure what that means. Probably has something to do with this stat

Route Running (RTE) – how open your receiver gets against man. Plays against MCV.

Release (RLS) – ability to get free vs press

Throw Accuracy (THA) only matters in a simulation.

Play Action (PAC) – effectiveness of PA fakes. Not sure if this plays against PRC or AWR.

Pass Block (PBK) – How well they block on pass plays.

Power Move (PWM) – Effectiveness of using the Square/X Power Move. Plays against PBK. Rex has said this is both in user and non-user block shed.

Finesse Move (FNM) – Same as above except the X/A Finesse Move. Rex has said the same about this.

Block Shedding (BKS) – Ability to get off blocks in Run situations. It is possible I am reading this wrong.

Pursuit (PUR) – Getting to the ball carrier when unblocked.

Play Recognition (PRC) – Recognizing Run or Pass or Screen and knowing where a route is going. SUPER important.

Man Coverage (MCV) – MCV vs RTE determines ability to guard a receiver and, apparently, plays against CIT to determine a drop animation.

Press (PRS) – Plays against release for the success of press.

Kick Power (KPW) –How far you can kick

Kick Accuracy (KAC) – how small that black area is on your kick meter.

Kick Return (KR) – IS this still in the game? If so, this is how effective a player is on kick returns.